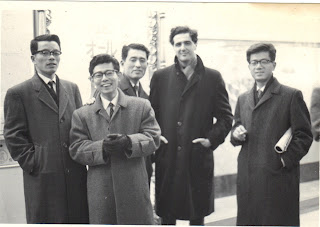 A sea voyage: we're supposed to get under way at 9 pm, it it now 4:30 pm. Standing at port-hole looking out on tractors, etc, this class 3 cargo liner's teleology I am moved to turn my direction toward a troop ship (?) that dominates the right: the water's present movement is quiet, which sort of ease's even the objects most conducive toward rendering the will tortuous.
The time for getting under way has now been extended to 10 - Dolores is resting: we shall go out on deck - on out coats of course - to see the shore slowly pulling away from the ship -
Not good to make any comments for the quality of objects confronting us - the high seas should be one site vast enough to take the stress all responses. The simplicity one must at all times cultivate, so that every action humanely moved is in the blood because of a tender predisposition.
Even this writing can evince a similar structure - for instance, sitting in the lounge a picture-window holding in its defining lines a number of freight trains next the sea against mist coming from the mountains as back ground for the freight trains, one is led to pay least attention to the words around him, for the vision tends to hold where as the noise is a source of unrest: to whom?
to what? no answer for what is at bottom a line of vision. I do have some fears that this voyage is purpose may end in despair, but they are probably due to the same quality of unrest that is consequent upon noise. What has caused me to use noise as a choice metaphor? no doubt about it: the ship is at all times humming (below breathing?) the life is in the breath!
The sky passed out under the Golden Gate Bridge - we could hardly say our feeling was one of awe: it was too dark! The sea comes to my imagination in the form of a ceaseless churning of tar -
and the land falling off its sides is the piteous mask of the apparential.