A sea voyage.  We're supposed to get underway at 9 p.m.; it is now 4:30 p.m.  Standing at a porthole looking out on tractors, etc., this class 3 cargo liner's teleology, I am moved to turn my direction toward a troop ship (?) that dominates the sight: the water's present movement is quiet, which sort of eases even the objects most conducive toward rendering the will tortuous.
The time for getting underway has now been extended to 10.  Dolores is resting: we shall go out on deck — in our coats, of course — to see the shore slowly pulling away from the ship —.
Not good to make any comments re the quality of objects confronting us — the high seas should be one site vast enough to take to stress all responses.  The simplicity one must at all times cultivate, so that every action humanely moved is in the blood because of a tender predisposition.  Even this writing can evince a similar structure — for instance, sitting in the lounge, a picture window holding in its defining lines a number of freight trains next the sea against mist coming from the mountains as background for the freight trains, one is led to pay least attention to the words around him, for the vision tends to hold, whereas the noise is a source of unrest: to whom?  To what?  No answer for what is at bottom a line of vision — I do have some fears that the voyage's purpose may end in despair, but they are probably due to the same quality of unrest that is consequent upon noise.  What has caused me to use noise as a choice metaphor, no doubt about it: the ship is at all times humming (below breathing?) — the life is in the breath!
The ship passed out under the Golden Gate Bridge — we could hardly say our feeling was one of awe: it was too dark!  The sea comes to my imagination in the form of a ceaseless churning of tar — and the land falling off its sides is the piteous mask of the apparential.

These mysterious forces that move a ship — "who" are they?  Why the depths?  They reside far below, and we are excluded from the essences; we are only granted a nominal participation: their servant is our only way to them (the shakiness of my penmanship is, of course, due to the pendulum movement of the ship).
It may take another day before our stomachs can go with the cadence of the sea — nothing to be ashamed of, for in order to be the sea one must go through a transformation whose whole period is a state of becoming.  We haven't, therefore, gathered ourselves up enough for a walk on deck.  From a porthole I can see a clearing of water; the sunlight is tempered.
There's a treatment on this ship that edges in upon the sensibilities — that is, an intensity of decorum is proportionate to one's rank.  Although one sees all these lines of vista, he can't help bringing to task his own outward expressions (which are mere gestures more to hide than reveal) by a stress that only solitude can call forth.  That kindness, care, etc., can only be extended to those who meet the right quantity . . . thus the stress — and the solitude that resolves it.

Is there a tragic intent in the sight of gulls in the wake of a ship?  The horizon is awesome, for the argument is least evident.  I still remain quiet to myself, which is to say, few objects are moving enough — that is, arrogance is not this sentence's gesture, but so much is rigged up to demoralize that one cannot hope to relieve the droop in the eyelids.  To end this paragraph let it be noted that I shall not make mention of our fellow passengers, except this: their number is abstract.
Back from supper — again decorum was the order of the evening — not that there's anything wrong with good manners (I'm neurotic when it comes to that), but, all should be graced to the same degree (at least under the sky).  But I shouldn't talk about
the ways of the ship — nor let myself be angered by things that I thought I had left behind, although I understand not even the sea can so eradicate the blemish all around us (the walls?).  What I must do is keep my vision clear for the day when I can no longer hold back the flow of words directed toward a just account of the differential society (the gaze toward it is its Comedy's purpose).  This trip to Japan should give me a necessary union whose fruition points toward the way that is recovery.

Thought today would see us in good condition, but the sea is unusually unsettling — and to top it all, a smell of food clings to our stateroom.  Except for a few minutes on deck this morning, we've been indoors — in bed, to be exact.  There's a quietness on ship that makes one assert that seamen are of a more contrary lot in nature than land dwellers, but this could be misleading; that is, an empty head is sometimes quiet.  Hope to God tomorrow will be a smooth day — for Dolores' sake, of course — she's so seasick from the ship's disquieting tilt.
One could start a day's writing out of sheer boredom — not get at anything, but the notion or better emotion was due to a malaise of sorts.  We are doomed to some routine which we find at all times unsuitable for human consideration, but because of our station we are forced to submit — yes even to the most stupid predicaments: our manners are a mask hiding a collective distaste — in the privacy of our rooms we usually drop the pose and put all persons and things to the criticism, which leaves no trait without an underscoring: this is how we case ourselves and explain away the whole world.

There doesn't seem to be much of a letup in the swelling of these waves — yesterday was so bad that we had to put all loose things into the drawers.  Found out that if I read for any great length of time a feeling of nausea wells up, of course. I've weathered the storm, but Dolores has had it bad.  Today's the first day she's feeling well.
Not much to relate to when at sea — one's always on the watch for a whale, but all that one sees is the changing aspects of the weather: these changes seem to be the sea's actors; therefore, although the sea's more abstract, it does not follow that it is more cruel — we are viciously compelled by both.
I'd like to start a new book, but somehow feel regret will take hold of me by the middle of it — for that's the feeling I'm having with Lord Jim — I'm sure this isn't due to the writer's art: it's obviously the sea's fault and maybe tomorrow the prose will work better under my eyes.
Strange to be at sea and think of gardens — as I've said I'd love to live by the sea not on it.  This voyage would not be a total loss if I could just make a poem, and therefore be only 2 away from the end.

A day of rain!  Gulls floating in the wake — a silence all around us.
Don't feel I said myself with exceptional precision yesterday, but this can't be a cause for worry (although the mere writing of it gives it the lie), it shall be as if the memory were deranged.
It wouldn't be too successful for me to desire to fall away into darkness; we've decided this trip is the best thing that has happened to me: therefore, a healthy outlook as they say is the point of view to cultivate.  I should in some way qualify the above by the wish that erases all.

The trip's half over and thank God — this nausea is like the wake.  Not much to do on the ship — and to boot, you have to listen to the infernal noise of the workmen (elves?): poor souls they have it pretty bad.  Again an image of a hill fading toward the sea keeps cropping up: its background is one of light instead of another's darkness.  Haven't been on deck yet — the sun's out, so maybe in an hour or so we'll take a turn-around. 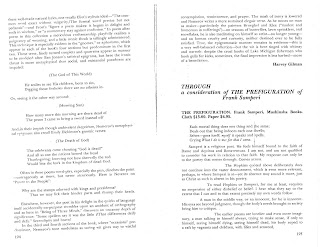 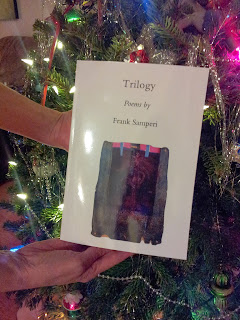