Letters to Frank from Robert Kelly 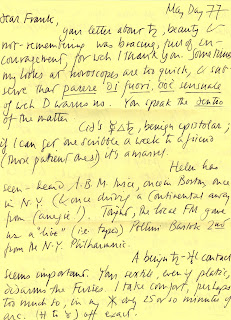 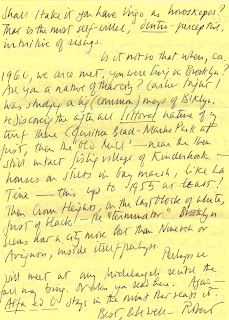 Dear Frank,
Your letter about t, beauty & not-remembering was bracing, full of encouragement, for which I thank you.
Sometimes my looks at horoscopes are too quick, & subserve that parere oi fuori cioe sensuale of weh D warrs ns. You speak the sentro of the matter.
Cid's symbol, benign epistolar; if I can get one scribble a week to a friend (those patient ones!) it's a marvel.
Helen has seen - heard A.B.M. twice, once in Boston, once in N.Y. (& once during a Continental away
from Carnegie!). Tonight, the local FM gave us a "libe" (i.e. tapes) Pollim Bartok 2nd from the N.Y.
Philharmonic.
A benin symbol contact seems important. Your sextile, even if  platic, aisarms the Furies. I take comfort, perhaps too much so, in my * only 25 or so minutes of arc. (symbol) off exact.
Shall I take it you have Virgo as horoscopes?
That is the must self-willed, dentro-perceptive, intuitive of usings.
Is it not so that when, at 1960, we once met, you were living in Brooklyn?
Are you a native of that city? Earlier tonight I was studying a (common) maps of Brooklyn, rediscovering the after all Littoral native of a turf there Gerritsen Brack-Marine Park at first, then the "old Mill" - near the then
still intact fishing village of Kinderhook - houses on stilts in bay marsh, like La Tene - this up to 1955 at least!
Then Crown Heights, on the east block of white, first black - the "terminator". Brooklyn seems now a city more lost than Nineveh or Avignon, inside itself perhaps.
Perhaps we will meet at a Michelangeli recital the fall may bring or when you read here.
Again - Alfa ed O stays in the mind that reads it.
Best, & be well - Robert

Dear Frank,
that's certainly an extraordinary rising cluster in your horoscopes - such a delight in complexity, trust in Rigor, & trust as well in its (apparent) contrary - poet with slide rule, general with dreams still in his thought long after he quits his tent. By the equal-house- (from- Arc), since I don't know the actual birth house or MC, I see II culin., the Master's arduous sign, & the "Eterric" (Can I say?) moon early in symbol I take it.
And robust sol in IX (where's my arc), I can well believe your consultation so many years in your room,
IX the sure mental traveler. "I looked to the oak" you said, & "my ealks were myself to myself" - 2 splendid phrases I return to you. The symbol night a t cusp of X who is it who says we really only use the planets between & Luna - your (symbol) your math must be strong - a Boskovitch or Master Vico), my (symbol)
(Sometimes that word "use" arch I so much respect & even aspire to, to use people, be used (vile American dread of using & being used - piccolo refiuto!)), makes me shy, sense of "using" (symbol) etc, an outrage.)
Did I send you this "This Lady of!" I wont apologize again for my "memory" if I did , pass one on the first grieving woman you see. ("Grieving Women" it comes to one, all of a sudden, the earliest poem of mine (1954)
can still make sense - after M's morning flesh on P. Julius's tomb.)
yes, a pleasure to exchange these letters
I secretly yearn to say: genethliac! 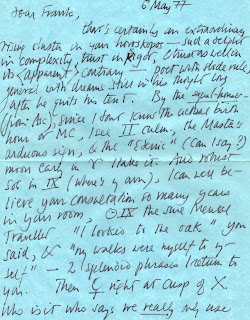 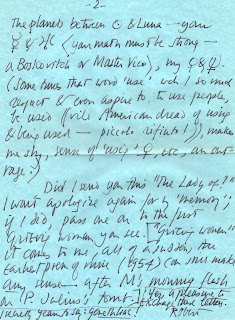 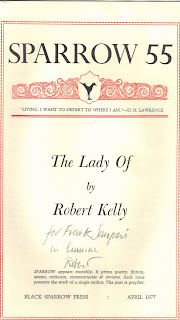 This de-imaging of woman is practiced as an essay in humble metachronic journalism.

"The Lady Of" is a reconstitution of an ur-The Lady of Shalott, and means to rescue a doctrine of woman from that curiously empty, frightening, beautiful old poem

(its absence clogged with memories, the colors of distance and gone and loss, colors all saturated by the
polarizing filter of Tennyson's rhetoric).

Like a crumbled frieze whose figures are lost but whose proportions are still evident, The Lady of Shalott casts a certain work-space in the mind, a shapely space.

(How shapely the original is! How its shape is lovelier than its logic, if that could be. (It can't be.) How the shapely waist of the poem pinches the middle of the story until we lose what really happened, and are left only with her loneliness. I mean loveliness. Loneliness. Loveliness. Loneliness. How did she die?
Of her own beauty? Is that the 'curse' Tennyson speaks of, a fated perfection of line and color, ominous as Psyche's beauty?)

The original casts a shapely proportion in the mind the moment now comes to inhabit and to articulate anew.