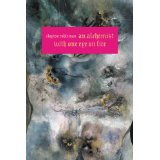 The paradise of the Frank Samperi diagram,
showing poets how to get through. Can you believe it,
I said to Carol Berge, on the sofa beside me,
she was twisting her hands in something on her lap,
"I am unsure." So I investigated,
spotting the black horse head areas in what looked like
a complex airport diagram, with lights, on a vast wall,
Samperi appeared, more healthy than in life,
"The horse head areas are disaster spots,
you have to figure out how to move around them,"
or did he say "through them?"
Now in Samperi's realm,
on his road, or via, I struggled with bales,
saw marvelous living rocks, emerald things speaking to me?
I was in "everything is alive."
"all is in constant transformation, "then I thought of Caryl,
made it back to our bedroom where hunched Samperi figures were by
her bed, backs to me.
I saw one slithering under the springs,
I threw them away-monks? demons? Samperi outriders?
and immediately wanted to pursue was it Samperi's Jumanji?
Not sure, never sure, always on this wavering transcendental road,
plagued with the iridescent,
where hollows are owls, thrown instantly-sprouting reeds,
reeking with meat, and the meat spills its lore, whore-angles pour,
to reveal the beast in harbor, the hall-spurting storm
is a chrysanthemum-radiant isle. Then Frank reappeared-
I told him: I'm so blocked by transformation, plus
your henchmen passing rods through Caryl...
"Here," Frank said, "work with these..."
He spilled some black pebbles which I scooped, swam with,
tossing them before me as I pulsed,
I ran the Samperi road, miles racing under me,
toppled herms, Frank's life and death, I saw the mother he told me was
a prostitute,
her hair streaming lizards, she wept little Franks who I kissed,
hedges, towers, a rain of moles, a goblet passed or was passed to me,
I watched the shrimp dancing twitch, then drank,
my infancy became a pile of tiny pearls, "what to do" became a lot of tools,
my newspaper route, I was at 49th and Boulevard Place,
freezing, as the truck dumped the Indianapolis Times,
I tore open the moor, to find the under-sage, twiggy trails led me back,
flying Samperi's diagrammatic sentence, I heard
"You've joined the diagram..."
Was that Berge?
"Oh it is wonderful," she said, as I plopped down beside her,
"wonderful when vision works at the speed of mind."
Then I saw her chipmunk, I mean her baby anaconda, and broke down
in tears:
only parts of the dream could be recovered here, and is this vision?
I have remembered, invented, remember-invented,
I was in paradise how long?
I cannot recall its caul, or its multifoliate delivery-
cannot here recreate the dream's sensual matrix.
This is the real Fall, the divisional void.
Then to awake, face the clock, the media headlock,
what a wrench, fellow man, what a wacky disorienting brainswipe,
the zero time of paradise chopped up into space.

Notes:
"SAMPERI'S DIAGRAM": The poet Frank Samperi's (1933-1991) major work is a
trilogy made up of The Prefiguration, Quadrifariam, and Lumen Gloriae, all published
by Mushinsha-Grossman, in 1971 and 1973. Station Hill brought out a selected poems
by Samperi, Spiritual Nescessity, edited by John Martone, in 2003. I knew Frank
both in NYC and in Kyoto, and published his Crystals as a Caterpillar Book (1967),
as well as some of his poems in Caterpillar magazine. He is a unique figure in American
poetry, whose force field gravitated totally around Dante.

From Clayton Eshleman, an alchemist with one eye on fire, 2006