Sandro Botticelli's The Birth of Venus, 1485 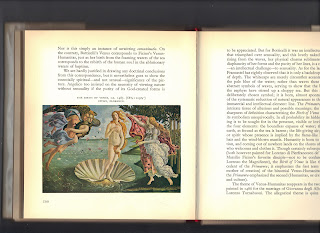 My father introduced me to so many things as a young person and one of them was the artist Botticelli.
The Birth of Venus is one of my favorites and I happen to see this in person in Florence when I was there on my honeymoon in 1995. Absolutely breathtaking!

"The Birth of Venus, an allegorical theme closely connected with that of the Primavera, marked a momentary return to the neo-Plantonic inspiration of earlier days. Botticelli's Venus corresponds to Ficino's Venus-Humanitas, just as her birth from the foaming waters of the sea corresponds to the rebirth of the human soul in the ablutionary waters of baptism.
In all probability its hidden meaning is to be sought for in the presence, visible or invisible, of the four elements: the boundless expanse of water; the good earth, as fecund as the sea is barren; the life-giving air; the fire or spirit whose presence is implied by the flame-like locks of hair and the wind-blown mantle. Humanity is born to civilization, and coming out of nowhere lands on the shores of nature, who welcomes and clothes it."