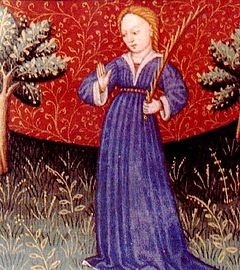 Virgo (♍) is the sixth astrological sign in the Zodiac, which spans the zodiac between the 150th and 179th degree of celestial longitude. Generally, the Sun transits this area of the zodiac between August 23rd to September 22nd each year (sometimes the dates vary slightly). Individuals born during these dates, whilst the Sun is within this sign are called Virgos.

Virgo is seasonally associated with the end of summer and the onset of autumn, when nature -having borne its fruit - recedes into conservation. Because its period indicates a change of season, it is known as a 'mutable sign',which indicates an instinct towards changeability and an easy ability to let go of past situations in preparation for future needs.


The sign is governed by Mercury, the planet of dexterity, communication, interchange of ideas and study. Mercury is also exalted in this sign, which as an 'earth-sign' is marked by practicality and perseverance. This gives an ideal balance between ingenuity of mind, and sharp intellect, and the strength of will needed to see creative ideas through to completion. In the other elements a strong Mercury can indicate fickleness or unhealthy restlessness, but Virgo's earthy qualities steady this trait and gives an excellent eye for detail. Virgos are reputed to be adept at languages, to possess a love of literature, a deep interest in history and statistics, and a good memory for details.

Virgo is considered a 'feminine' or passive (introvert) sign. This gives the characteristics of being reflective and receptive to the ideas of others. This passivity, accompanied by a flair for discrimination and eloquence with words has given Virgos a reputation for civility and good manners. They are said to have a talent for projects which require precision and detail, and to excel at skills and crafts which require patience and exactitude. On the negative, they are highly sensitive to perceived criticism, and can appear to worry unduly about the need to make things as perfect as they can be. Joanna Watters (2003) defined a keyphrase for this sign as "I serve", and summarises the Virgo reputation for over-analysing emotions by saying:"One of the Virgo lessons in life is to learn that to err is human, to forgive divine, especially when it comes to love.

The Ascendant (or rising sign) is often considered the mask one wears when meeting others. Perhaps it is most aptly thought of as the automatic responses to one's environment. The Ascendant shows our natural defenses and how we cope with day-to-day issues. The energies of the sign and condition of the Ascendant are most overt and obvious to others. The Ascendant shows an individual's first, natural reaction to new people and situations.

Poem from The Prefiguration