“You’re in light, song”
Considering Frank Samperi
Russell Duvernoy
Paul Revere’s Horse
The mania has even crept into our poetry. These days we want it loud! Brash!
Ceaselessly innovative and exotic! We require verbal pyrotechnics! Exquisite contortions!
Delirious harangues and impossible oddity! Poetry is performance, and
performance, it seems, calls for a bold bravado and almost unhinged exhibitionism.
I am lampooning of course, but you get the point. In a world of constant noise,
poetry goes to great lengths to get itself noticed.

Beneath this bluster there remain poems and the makers of poems, poets. Consider
Frank Samperi: Born 1933 in New York City. Died 1991 in Arizona. Lived most
of his adult life in Brooklyn. Italian American. Illegitimate son of an immigrant
mother who died when he was 11. Raised by his aunts. Korean War veteran. Self
taught scholar of Dante and Aquinas. Acquainted with Zukofsky, and a correspondent
of Cid Corman, whose letters were a valuable source of sustenance for the
retiring Samperi. Corman was instrumental in getting Mushinsha/Grossman to
publish Samperi’s trilogy: The Prefiguration; Quadrifarium; and Lumen Gloriae in
beautiful editions in the early 1970s.


A poet’s poet’s poet, whose books, save the 2004 compilation Spiritual Necessity
published by Station Hill, are all out of print.


If they knew
why this grief
the hour when
men gather in
fishing nets
or a boy alone
on a hill
hesitates between
light and shadow
they wouldn’t go
looking backward
along this river
below the olive grove.
To carry a song
into the city,
not to come away
with a prizethis
can’t be
considering
in memory
the aftermath
of burntwood-
but nevertheless
to sing of a rose
against a sunrise
and of a man
moving toward water.
–from The Prefiguration: Branches
Here witness the poem as a mode of transformation. The poem waits, abiding, until
the encounter. We infuse it with our attention and it rises to meet us. Samperi’s
poems ask us—politely but firmly—to approach the same still silent awareness in
which they were engendered. Like slow raindrops piercing a flat pond, reverberating
rings of concentric circles in play across the surface, they do nothing more, nor less,
than repeat a single, intense, intent, and ultimately transformative note: Here, Here,
Here:


from
the cold
wood
a silence
close
upon
a fluttering
of birds
beyond
behind the
apple-trees
among the
telephone
poles
on the
hillside
a falling
of
leaves
–from The Prefiguration: Branches
This encounter, this transformation, cannot be universalized. The words do not
point to a static configuration. Herein lies a great difficulty. If we are not careful our
cataloguing mind, even for readers of poetry, can take over, and place this poem, or
any poem, within a closed matrix of poetry, reading it as an example of a ‘Kind’ of
work—which it is. The poem then begins to lose its freshness. Instead of a living
breath we get a formaldehyded butterfly with a label.

Every time we read a poem should be the first time we have ever read. That’s how
unmediated the world needs to be made in order to allow us to see it. One tactic
that some contemporary poets employ is to thus make their poetry so strange, the
syntax so broken, the motions so un-soft, that the affect is to jar you into attention.
You read it anew because it cannot be read otherwise. This can work when it works.
But Samperi takes a different tack. Rather than pierce us with unfamiliar cadence,
Samperi gravitates to the starkness of clarity:


I am an anchorite.
And (I am Manfred’s half-brother.)

In the morning
I go to a coffee shop.

Sunlight is
on things.

The Avenue
Seethes with health.

After I have had
my coffee and toast
I go back to my furnished room.

I am stirred by some
white blossoms near
low uncut hedges.
and

the wind cools my eyes–
for the trees are blinding.

In a moment
I shall be in the room
and I shall be glad.

I cannot bear
sunlight in the morning.

–from The Prefiguration: Song Book

Samperi’s loneliness can be luminous. Desolation is not bereft, but points us instead
towards greater attention to the silence. The effect is simultaneously simple and
haunting. Nevertheless this austerity retains its own humble awareness of time
and place, of the particular. Samperi does not seek to escape the pain of time, nor
to deny it, nor to entertain it away. Rather, he bears witness in a close, measured
cadence.

–from The Prefiguration: Ferns


When you read poetry like this with a rushing mind, you can fly right past it. If the
acknowledged danger with courting reader-stunning idiosyncrasy is that idiosyncrasy
easily tumbles into solipsism, then the danger of Samperi’s quieter tack is its
tendency to enable one to breeze over the complexity and depth of the work. We
might say of Samperi: Yes, I get it, it’s ruminative. He does the quiet, close observance
thing really nicely. But this is to overlook a fervent seeking intelligence that
emanates out of the poems, and, more-so, that begins to bloom in strangeness with
repeated readings. Samperi’s lack of titles show the poems as not so many disparate
finished performances, but as pieces of an evolving work, an on-going cycle, a way.
On repeated readings they coalesce to reveal a vast stoniness, an echoing that tolls
against time and carries a ceaseless pad of measured, counting, footsteps:

I have seen him
in the garden
when a songbird
flew among bright
branches and a dog
barked in the street,
walk by a rose bush
and along a path of tulips
toward her grave,
which lies to the right
of an apple-tree,
and place a wreath
of white carnations
on the headstone.
This I have seen
him do many times.

–from The Prefiguration: Song Book

Samperi’s preoccupation with time shows how close his relation to poetry’s cousin,
philosophy. Not only is he aware of the way that his work is not immediately recognizable
as being germane to the concerns and commitments of his more fashionable
poetic contemporaries (an awareness that at times is portrayed with a slight, if
perfectly understandable, tone of bitterness), but Samperi is determined to plumb
the depths of what time is and not just how it appears. This concern manifests in
an awareness of the inherent contradiction between the marketplace and poetry
that, like Samperi’s, seeks to achieve the fullness of a vision dictated by less temporal
forces. This is not a new story, but Samperi’s work specifically acknowledges it in
interesting ways:

Samperi’s determination to think things out—spiritually, politically, poetically—
manifests in the occasional hermetical intellectualism of his prose work. As an
example, “Crystals” (included in The Prefiguration) forges its own genre—prose
poetry? metaphysical tract? intellectual theology? all of the above? What does it
matter—a sentence like:

It is obvious that the notions making it on your own and being responsible are
there solely for the sake of stressing the eternity in the now.

has all of the contemplative strength of the best Zen koans, refracted through the
Western tradition of spiritual philosophy. What does this mean? It is something
that, like Samperi’s more seemingly ephemeral pieces, bears up under pondering. It
transmits its own meaning. The words themselves breathe in your mind in a place
beyond concept, though tantalizingly intelligent. This is not word-play, but neitheris it the syllogistic contortion of scholastic philosophy. This is a sentence to live with.

Here a number of quintessential Samperi tropes are brought together in a synthesis
of motion and abstraction, nouned particulars grounding the journey even as
the poet is conversant with angels and ever attentive to the mysteries of light. We
recognize our place with the trees, the sun, the water, the birds, the simple elements
of life, even as we are forced to confront the strangeness that they are all here
and we are here and it is real. Samperi is the modern poet whose work is the most
un-ironically fraught with angels and light. James Hillman writes, “Without the
inherence of the angel in the word, how can we utter anything but personal opinions,
things made up in our subjective minds?” (Blue Fire, 28). Pertinent here is
the distinction between being “just made up” and something that traces a genuine
access to an Other that exists outside of a single mind. Poems are not simply made
up, and poets do not simply make them up. Poems, paradoxically, may be made of
words, but they are not just putting words together. Therefore the poet is a worker,
not with words, but with something other. But what? Not this, not this, famously
answers the Buddha.

The intensity of vision and attention to the particular mirrors the intensity of
thought. We can hear Samperi’s songs as gatherings, repetitive, almost compulsive
basic plain motifs—light, dawn, solitude, silence, gardens, birds, angels—a murmuring
of an intensity that does not abate. And yet they are not only pictures, they
are ideas. Samperi transcends the sometimes tension between poetry as presenting
images and poetry as being the actual motion of thought. His poetry is not something
you think about, it is thought, in the full richness of what that might mean.
A poem is not to be understood as representing an image which is a symbol which
stands for this which means this and thus equals that. This kind of way of reading
poetry, however traditional, comfortable and common, is a dead end. Rather,
in Samperi’s work, there is no gap between image, word, sound and thought. The
sounds and images are thought—the conceptions, the movements are the face of
their thing-ness. We encounter and swim in them. The ideas are embodied in the
things that elicit them. In this way, the poem becomes itself a new and unique
particular that exists as coextensive with the world that engenders it. Rather than
simply holding up a mirror to what is, the mirror of Samperi’s poems reflects a
transformed vision, a world that is both “the same as it ever was” and yet eternally
new, unpredictable, and pregnant with potential. Samperi’s work is to anneal the
motion to the stillness that all things are, and then present it for us as a clear source
of fresh motions and emotions. It is to aid in another turning of the wheel. This is
what jettisons poetry out of the orbit of mere finery and pleasant aesthetic illusion.

You’re in light, song;
birds on branches
already in bloom
begin to twitter;
nighttime’s behind you,
which, in truth, can
never enter into
the melody you have in heart:
see, the old men
sit above the river
twisting toward the ocean,
and the children
carrying baskets of lilac sprigs
turn momentarily
to look at the hills and woods
around the city.

–from The Prefiguration: Branches

We have to find the poets whose poems can become more than words. Is my poet
your poet? Is my Samperi your Samperi? The answer of course, which we all
know, is no. But the fact that we can ask this question, and even, in a certain sense,
have to ask this question, should allow us to recognize how beautiful it is that we
can ask it—that the very same words on the very same page can rise to such a multiplicity
of encounters, and that each of them can be real. In this sense, not only is
my Frank Samperi poem not your Frank Samperi poem, it is, truly speaking, not even
Frank Samperi’s. 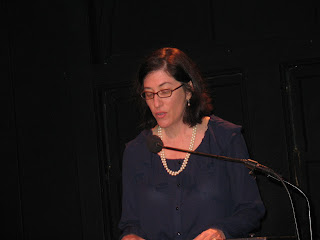 Frank Samperi's Reading at Beyond Baroque